Skip to content
Talysh
Talysh is one of Azerbaijan’s most densely populated rural regions. Dotted with traditional villages full of kind-hearted and hospitable people, it’s the perfect place to experience village life-style and enjoy the natural beauty of the surrounding landscape.
Dmitry Lemeshev
Reasons to visit Talysh
Talyshs speaks own language, but can not be distinguished from Azerbaijanians by face. Pay attention on lady’s earing! This traditional earing tell us, that she is Talysh, better then anything else.
Museum of Centenarians at Lerik 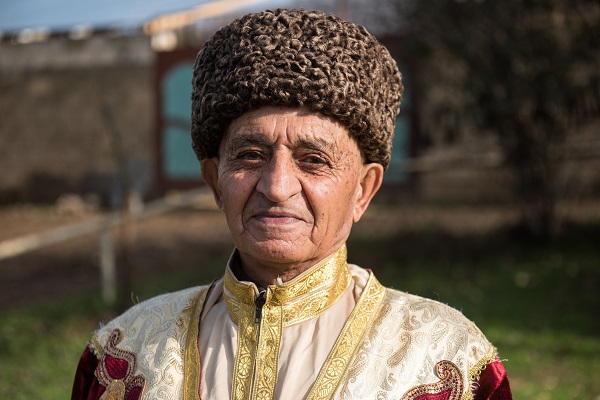 Abudin Aliev, the leader of the dance ensemble of long-livers, Monidigah village. Photo of Anton Agarkov.
About ten years ago, French photographer Frederic Lashop visited the district of Lerik and produced an incredible photo project about Talysh centenarians which now forms the foundation of the museum’s exhibit. Indeed, the district’s residents are rightfully proud of their elders—Shirali Muslimov lived a whopping 167 years, from 1805 to 1973! Today, it’s not easy to find centenarians in Talysh, their numbers are no greater than in the rest of the Caucasus region. Yet, the local elders are vivacious and lively! A visit to the museum should be combined with a performance by the local dance ensemble whose members are between eighty and ninety years old.
The Village of Orand, the highest of all Talysh villages 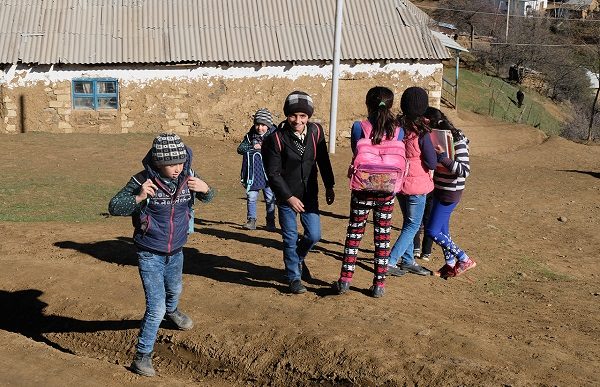 Children near the school of Orand village. Boys are happy, but girls are shy and hide their faces. Photo of Dmitry Lemeshev.
You think time machines don’t exist? Think again. Just one visit to Orand will make you believe that the car which brought you there is a genuine time machine! Yes, Orand does have some houses built from modern materials, and you no longer have to ride a donkey or go by foot to get there… But if you spend a day in this village, you’ll see that the way of life here has changed very little over several centuries.
Weave a tymon mat and take it home


To this day, the residents of Talysh make cane mats that they call tymons (Azeris call them khasir). Their method is not too complicated, although it demands a certain level of skill from the weaver. You can take part in weaving such a rug. It’s a great pretext to have a conversation with some locals, and an opportunity to pay a low price for a useful household item!
Enjoy fresh tandoori bread (Talysh people call it “tənu”) 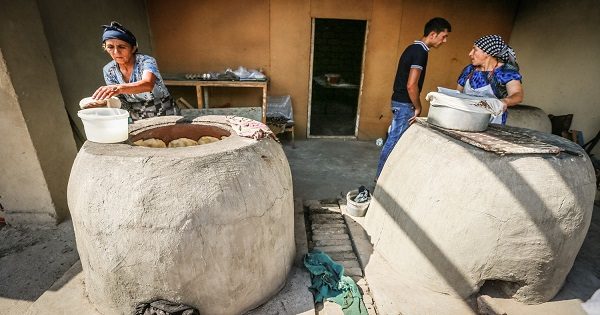 Making bread in «tənu» on the street. Photo of Aziz Karimov (from his article about Talysh women making bread and lyavyangi on the street in Baku).
Actually, you shouldn’t just try the bread, you should partake in its baking! Better yet, take part in building an actual tandoor oven (tənu) under the guidance of a real potter.
Listen to the songs of Talysh Grandmas


Talysh Grandmas is the unofficial name of the Khovon ensemble. They live in the village of Separdi, and are happy to perform for guests and talk with them about life in Talysh. Note that it’s not an easy task to catch them at home, since they often travel to Baku for TV shoots and to surrounding villages where they sing at weddings.
Sample lyavyangi 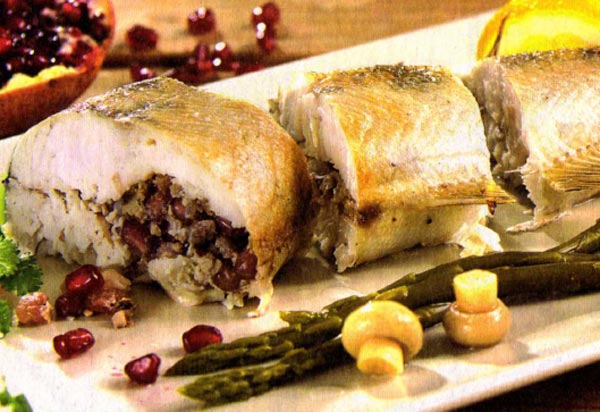 The true masterpiece of Talysh cuisine is called lyavyangi(n). In the Talysh language “ləvə” means “belly,” and therefore lyavyangin is essentially stuffed belly. In the coastal town of Lenkorani, make sure to taste kutum lyavyangi (stuffed Caspian carp), and high up in the mountains try the stuffed chicken. Both have to be cooked in a tandoor!
Things to know before you visit… 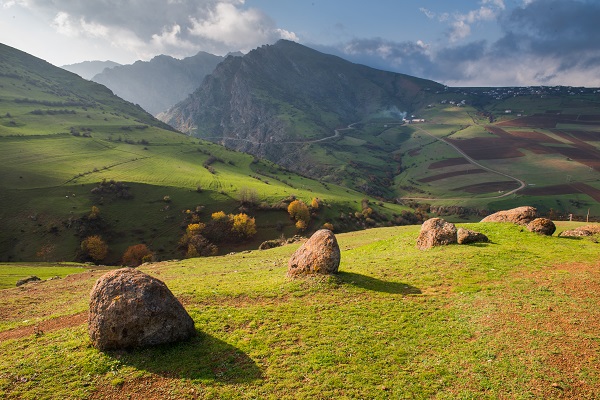 Morning view on the outskirts of Orand village. Photo of Anton Agarkov.
Talysh is the most common name for this territory, which is also referred to as Talyshstan or the Talysh Zone. In January of 1990, the leader of the local branch of the Popular Front of Azerbaijan, Alikram Hummatov, deposed the Soviet regime at Lenkorani for an astounding 10 days before being arrested. Between June and August of 1993, as a colonel of the Azerbaijani army, he did not recognize the authority of Heydar Aliyev and proclaimed the establishment of the Talysh-Mughan Autonomous Republic. This too ended in failure—Alikram was arrested and sentenced to life in prison.
As you might have guessed already, Talysh is a very sensitive region of Azerbaijan, so we advise you not to use the name “Talyshstan,” as it can provoke problems with the country’s security services. The name “Talysh Zone” is used regularly, as it implies that the area is just a part of Azerbaijan’s territory that is populated by Talysh people. 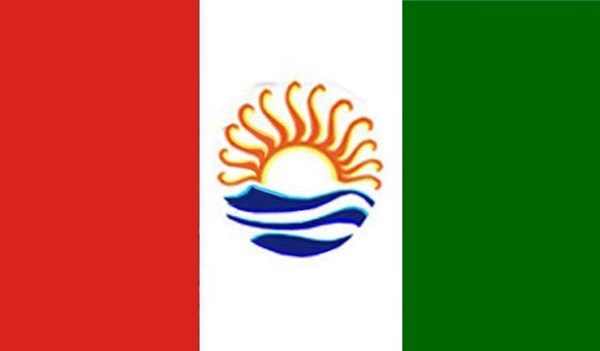 The flag of the Talysh national movement
The Talysh people constitute Azerbaijan’s largest ethnic minority; official statistics set their number at 112,000 people, but actual numbers are much greater, about 1 million. Furthermore, over a million Talysh people live in Iran. Since the late 1930s and even today, the Talysh people have been the subject of assimilation policies along with other ethnicities that live in Azerbaijan. Nonetheless, they continue to speak their own language, and strive to preserve their folklore and traditional crafts.
History of the Talysh people 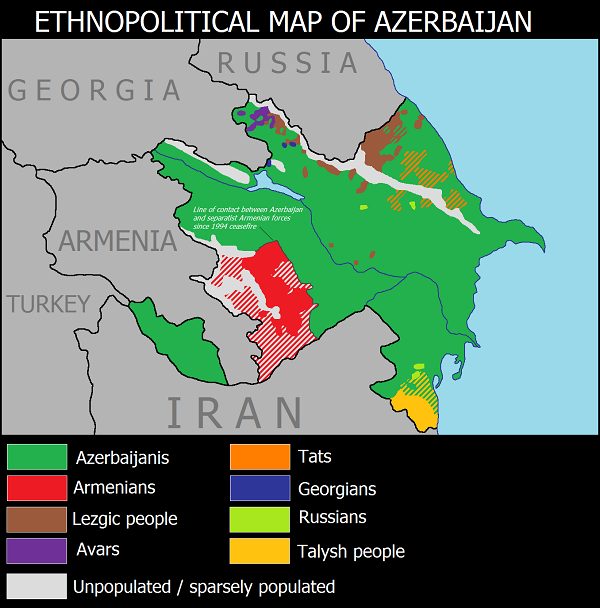 Ethnic map of Azerbaijan
During the Middle Ages, modern-day Azerbaijan and the Iranian provinces of Gilan and Ardabil (where there is a Talysh population) experienced their fair share of dramatic historical events. First this part of the world was conquered by the Seljuq Turks in the 11th century, and then in the 13th century, by the Mongols, whose army was mostly made up of Turki. Prior to these events, the local population spoke the Azeri language, a late language belonging to the Iranian group, which stems from the ancient Median language, and has given rise to the modern Talysh and Tati languages. Following the conquests, the greater part of the local population mixed with the colonizers and began to speak Turkic, while the lesser part remained Iranian-speaking. 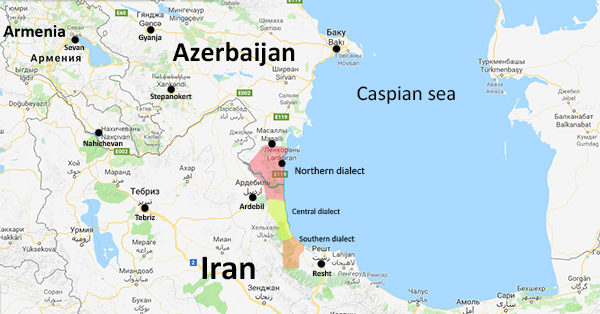 Map of Talysh dialects (sometimes, the central and southern dialects are distinguished as a separate language, Tati).
The first time Talysh acquired political independence was in 1747, following the death of Nader Shah and the consequent dissolution of Iran. Nevertheless, it remained in Iran’s orbit and under its influence until 1809, when the Talysh Khanate came under protection of the Russian Empire. Following the peace accords of 1813 and 1828 between Russia and Iran, a part of Talysh joined the Russian Empire, while the other part entered the Persian Empire. In 1841 the Khanate was abolished, but the descendants of the Talysh khans continued to rule the territory even as part of the empire.
During the Soviet era, Talysh became part of the Azerbaijan Soviet Socialist Republic, and in the first years of the Soviet regime authorities bolstered the Talysh identity by publishing school books and newspapers written in the Talysh language. Everything changed in 1937, when the mere mention of the presence of Iranian-speaking ethnicities in Azerbaijan became dangerous.
Following the breakup of the Soviet Union, Azerbaijan faced the risk of dissolution. Talysh and other parts of the republic saw the rise of national movements and subsequent separatist sentiments. That being said, the region failed to secure support from the majority of people and was easily put down by the government of Heydar Aliyev. His son, Ilham, the current President of Azerbaijan, successfully continues his father’s policies towards Talysh.
Talysh Culture 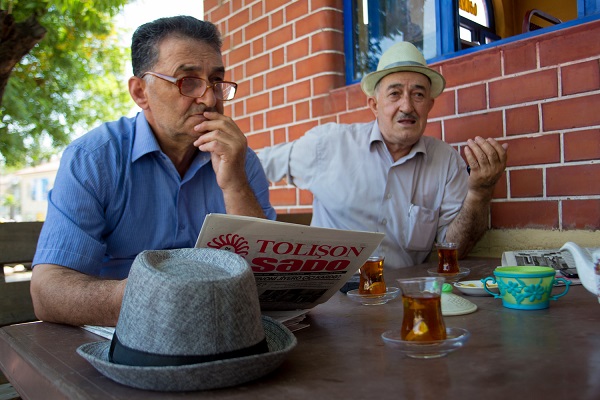 Old men reading «Talysh voice» newspaper. Photo taken from the article about the newspaper on chai-khana.org.
There are two Talysh-language publications: Alem magazine and Talysh Voice (“Tolışon sədo”) newspaper, which publication began following the 2012 arrest of Hilal Mamedov, the editor of another paper, Voice of Talysh (“Tolışi sədo”).
In 2016, due to international pressure, Mamedov was freed. The fate of his predecessor Novruzali Mamedov, the founder and first editor-in-chief of the Voice of Talysh, is more tragic—after being convicted of treason, he died in jail. Today, the Talysh Voice is seeing hard times, and only comes out once a month through the efforts of a single person, Rafig Dzhalilov.

Talysh music, on the other hand, is quite popular. The Khovon ensemble, better known as Talysh Grandmas, is widely known and appreciated throughout Azerbaijan. They sing in the Talysh language and perform on Azerbaijan TV several times a month! That being said, they are often asked to sing in Azerbaijani when they perform on TV.

The Talysh National Academy is a scientific society which studies the subjects of Talysh culture and history. Its members are ethnic Talysh scientists scattered around the world. Many members of this community were forced to leave their motherland due to accusations about the political nature of their research, and the desire to destabilize the region. The scientists themselves claim that they mean no harm to Azerbaijani statehood, and only criticize policies of Turkic assimilation.

Like most of Azerbaijan’s population, Talysh people are Shia Muslims. Back in the 15th century, the Talysh followed the teachings of the Safaviya order (which defected from Sufism to Shia Islam, adopted the name of Qizilbash, and became the backbone of the Iranian Safavid dynasty). At this time, Talysh murids were the only non-Turkic-speaking warriors among the Qizilbash.

Today, there is a diversity of religious practices in Talysh. There are village communities that are very dedicated to the observation of Islamic norms. In the village of Boradigah, for example, almost all of the women wear hijab in public, while all the men carry subha; during the prayer hours the streets are deserted. At the same time, however, in many villages you’ll meet people for whom Islam is very important, but who express their devotion not by wearing long beards but by reading an electronic version of the Quran on their smartphones. Moreover, there are plenty of non-religious people in Talysh as well; in Masally, Lenkorani, and Astar you will find that alcohol is served in almost every restaurant.

Women in Talysh are the perfect embodiment of the blending of local and Islamic traditions. A travelling man won’t be able to speak to a local woman without the presence of her male relative. Even taking a picture of a woman is likely to be difficult. Why is that? The men of Talysh will say that this is what Islam demands. Consider this example: in the highest Talysh village of Orand, only 10% of the residents go to the mosque, but it is there that the women have the least opportunities, and their role is restricted to the house (women can only leave the courtyard to take the cows to pasture and bring firewood from the forest).
We would say that the ancient traditions of their communities are much more important for the locals than the norms of Islam. Throughout Talysh, we’ve seen many sacred sites that are called pir, which history dates back generations to the pre-Islamic period. We have even heard about sacred trees.
Text
Dmitry Lemeshev
Other articles by
the author