Skip to content
Seven Secrets of the Kubachi Shawl
The Daghestani village Kubachi is, first of all, famous for its goldsmiths. But this village is known not only for its jewelry… The women of Kubachi wear singular shawls or the kaz which easily identify them at first glance. We interviewed the female villagers about the secrets of this remarkable headwear, and here’s what they told us.
Dmitry Lemeshev
Secret 1: Where does the kaz come from?

The kaz is made of white fabric embroidered with gold thread and adorned with fringes. Strictly speaking, it is not a shawl but a scarf. But it is, nevertheless, referred to as shawl. Only the women of the Daghestani village Kubachi wear such shawls. No other shawl or scarf is referred to as kaz. And the kaz is not worn by women in any other village, only in Kubachi.

Departing from their native village, the women of Kubachi usually take off their traditional shawl. They hardly ever even travel to the neighboring village wearing the kaz. In Makhachkala, the kaz can be seen in the streets only during official festivals such as the Day of Peoples’ Unity, the Daghestani Constitution Day, and the 2000th anniversary of Derbent. On such holidays, the Daghestanis wear national costumes. It is not known exactly how old the kaz is and whence the tradition of wearing the shawl came from. The local residents believe the kaz is as old as the village, i.e., about 15 centuries.
Secret 2: Matrimonial 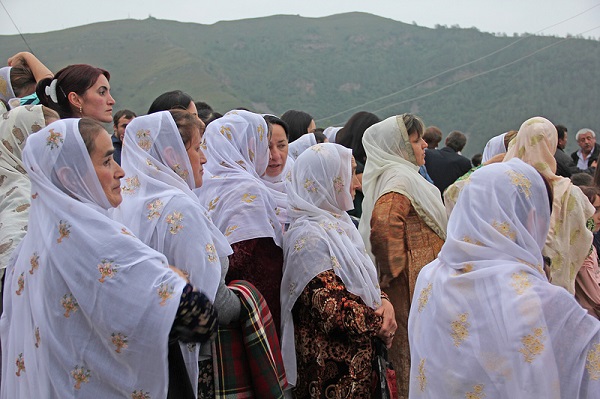 The kaz is not an ordinary headwear with gold embroidery. The pattern on the shawl determines the status of the girl: married or not. Oftentimes, the women of Kubachi embroider flowers or feathers on their shawls. The patterns on the shawls of single women are small whereas married women wear the kaz with large patterns.

The fringe length also differs: it is shorter on the shawl of a single woman, and longer on that of a married woman. On an ordinary kaz the fringe is sewed only on one end. Previously, women would wear the kaz upon “chokhto” i.e. the Daghestani female headwear (resembling a tube made of cloth, into which women used to hide their hair). Nowadays not everybody is wearing it; usually, the kaz is immediately flung upon the hair.
Secret 3: Mourning 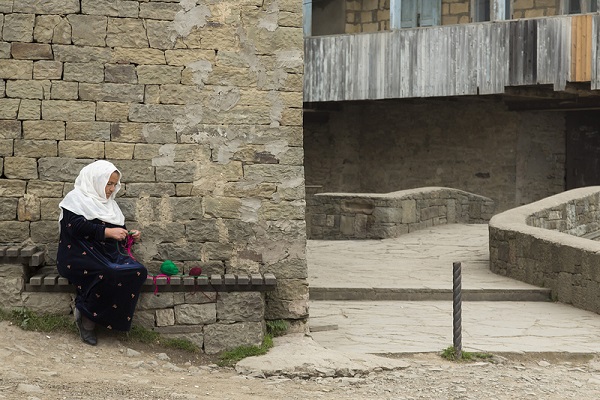 When somebody passes away, the Kubachi women do not wear black attire. Instead, the kaz indicates that the woman is mourning: there will be neither fringes, nor bright patterns. The fringes are removed for 40 days or 1 year, depending on the closeness of the deceased relative. When mourning is over, the fringes are sewn on again.
Secret 4: Facts and Figures 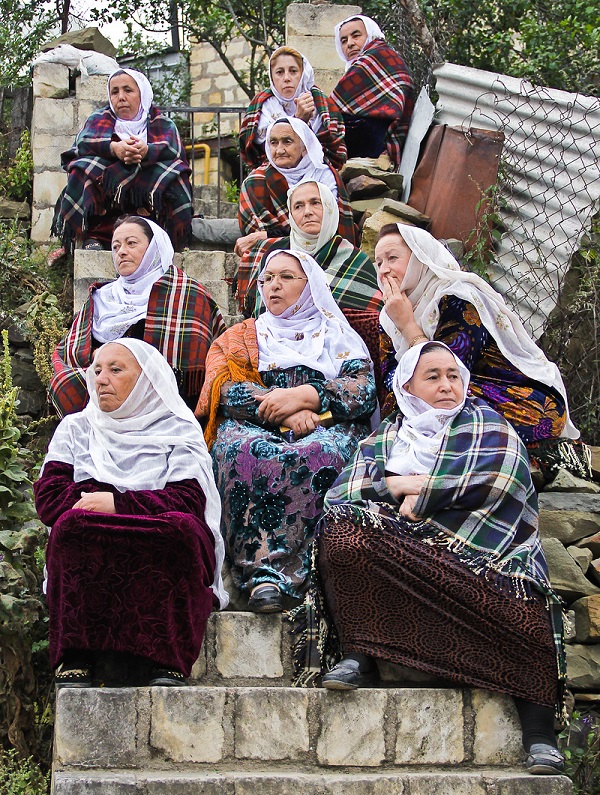 The women of the modern Kubachi say they buy cotton fabric for the kaz from a local businessman who brings it from Arab countries. A length of fabric for the kaz is worth little more than US$15, which not at all cheap for a Daghestani village. In Soviet times, the kaz was made of marquisette but it got wrinkled easily and turned yellowish over time, so the shawl lost its beauty. The standard length of the kaz is 2.5 meters (less fringes), the width is 50-70 cm. If the woman is short, the shawl may be abridged, as long as it doesn’t strike the eye.
Secret 5: Hand-made
In Kubachi every woman learns to embroider kaz since childhood. Elder women in the family (sisters, mothers, aunts and grandmas) teach the girls from preschool age. Sometimes the tiny girl who does not read and write is quite dexterous with the needle. However, girls start wearing the kaz much later, at 15-16. The kaz is worn at home, in the street and in school, but of one’s own accord, without compulsion. And since recently, a new tradition has emerged in the village: on September 1, all the girls of the eleventh-grade wear the kaz in school. Modern Kubachi women oftentimes embroider the patterns on a sewing machine.
“Don’t the Grandmas grumble that the young have grown hopelessly lazy and don’t want to waste time on hand work?”
The women explain the innovation as follows: “It is faster and the eye-sight is not impaired.”
It’s no crime to wear the kaz embroidered on the sewing machine. However, such a shawl is worth much less, approximately 2000-3000 Roubles. 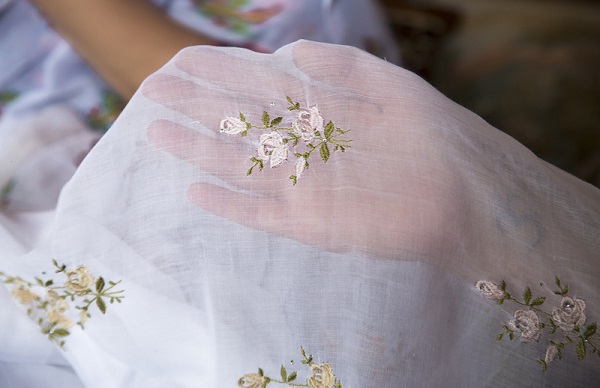 The cost of the hand-made kaz depends on several factors: how fine the embroidery is (the finer, the more expensive); the age of the thread and fringe; how much time it takes to work on the shawl. By the way, the embroidery takes from weeks to 1 year. The hand-embroidered shawl may cost over 10,000 Roubles.
Secret 6: Wedding 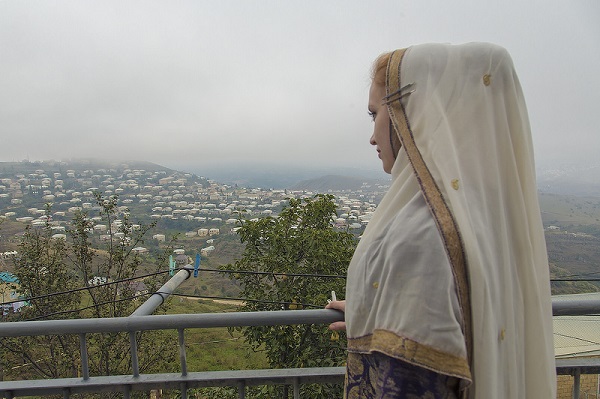 Girls in Kubachi get married in traditional wedding dresses. The bride’s kaz is called lumkitab-kaz. It differs from the ordinary one by fringes on both ends, and not on one; the long sides are braided. There may be no embroidered pattern on the wedding kaz but braiding is mandatory. When a Kubachi girl gets married, she is wearing the lumkitab-kaz and the traditional dress worn by her great-great-grandmothers at their weddings. The dress is embroidered with gold and silver threads. Over time, the freshness and brightness of these dresses fade away. I wonder: don’t modern girls shun old and worn-out dresses? The answer is emphatic “No!” They say: “We proudly wear these dresses!” 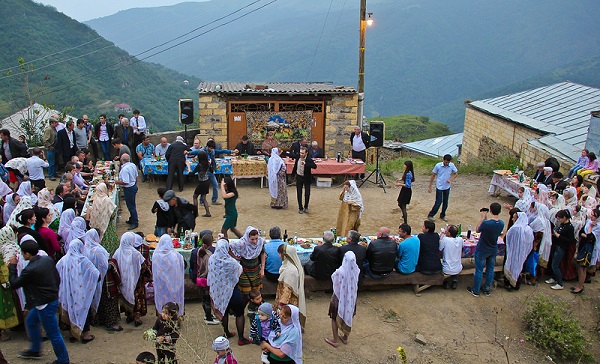 If destiny didn’t bless the family with daughters, a wedding dress can be donated to any marrying female relative or young daughter-in-law. Traditionally, for 40 days after the wedding, the young wife wears national costume both at home and outdoors.
Secret 7: Hereditary
The women of Kubachi have preserved the custom of transferring the kaz fringes by succession. The older the fringe on the shawl, the more valuable it is. That’s why women take the pains of attaching the fringes from one shawl to another. Even nowadays, women wear the kaz worn by Kubachi residents in the 19th century, or earlier.

When marry off a daughter, the Mother must put the kaz into the trunk with the dowry. Their number is now restricted, but the more, the better. But there’s one unbreakable rule: the dowry shall contain two kaz-shawls with special patterns: the katsanna-kaz (with flowers) and kalkussala-kaz (with feathers). According to Kubachi women, these patterns are the oldest ones that have come down to us from ancestors to-date, and modern girls shall pass them on to their children. 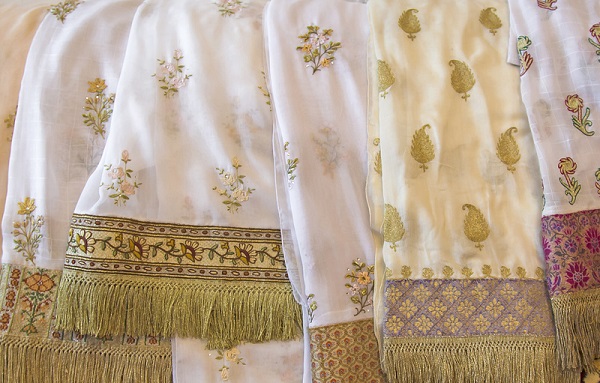 On the right: two kaz-shawls that are mandatory for the bride’s dowry. These are the katsanna-kaz (with flowers) and kalkussala-kaz (with feathers). According to Kubachi women, these patterns are the oldest ones.